skip to main | skip to sidebar

Some roads call to me
across years and distance, like
Going-To-The-Sun
My love affair with the western National Parks started when I left high school 2 weeks before the end of my senior year to take a job as a cook at Old Faithful Lodge in Yellowstone. That summer changed me forever. A couple years later I found a National Geographic book about the national parks and first read about Going-To-The-Sun road, the engineering world wonder that bisects Glacier National Park, crossing Logan Pass at the Continental Divide. If ever there was a road that just begged to be ridden, it was this road. Even the name - Going-To-The-Sun road - calls for riders. 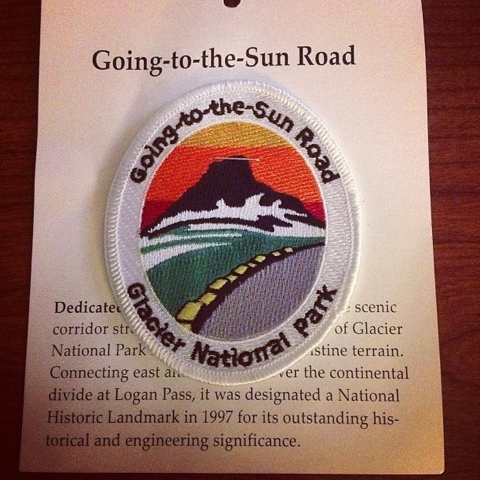 Last week while vacationing with my family I got the chance to ride up and down the west (longer) side of the road, and it was without a doubt one of the most spectacular rides I've ever done. If you have done it, you know. And if not, put it on your list of must-do rides.
Like our trip to Yellowstone last year, and J-Tree earlier this year, I tossed the 1990 Diamondback Apex MTB on the roof rack because it's a reliable, go anywhere, comfortable bike that I'm not worried about hauling over hundreds of highway miles and leaving locked to the rack while doing tourist stuff. I picked it up a couple years ago for $5 as a CL divorce sale, and it's one of the best 5 bucks I ever spent. Only the WTB Rocket saddle and new rubber was added, and after an overhaul it's a pretty fun ride, if a bit ugly. I debated bringing a nicer bike, but in email exchanges with friend Chris B from Bozeman, who hoped to join me for the ride, we discussed the gravel sections (construction) and the benefits of a front triple for climbing. In the end, I ended up going solo (more later), the "gravel" was fine, and I rode almost the whole 12 mile climb on my middle chainring. I was comfortable on this bike for the 46 mile RT, and it was one of the longer rides I've ever done on a MTB. 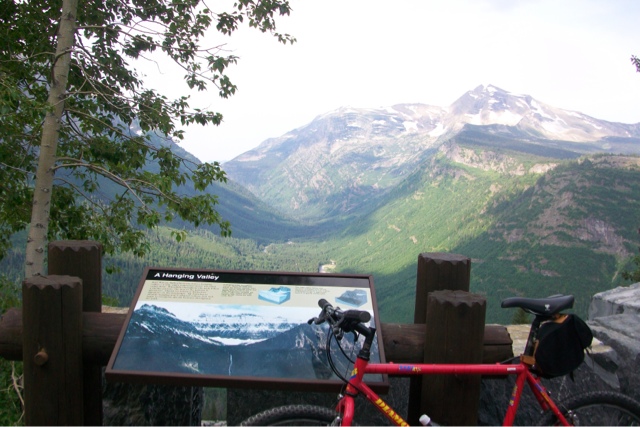 Going-To-The-Sun road gets a crazy amount of traffic during the height of the season; it's the Old Faithful of Glacier NP, the center of tourist activity. The road is narrow and windy and hugs a cliff face thousands of feet in the sky for a good part of it's length. As a result, bikes are excluded between Apgar Village (west side) and Rising Sun (east side)  from 11 A.M. - 4 P.M. daily. So riders have to plan accordingly and get an early start or be willing to ride at night. I had been told that if you were heading down by 11, you were probably OK since you would be going (at least) as fast as any other vehicles. But I also noticed a couple riders get pulled from the road down in the flat McDonald Creek valley by shuttle Bus drivers. Apparently one of the duties of the shuttle drivers during peak hours is to pull over and load up late cyclists. The shuttles are equipped with fold down front bike racks, and I noticed the drivers keeping a seat or 2 open on "full" shuttles for this possibility. I was determined to avoid this indignity.
We were camped at Sprague Creek campground. I read to plan on 3 hours up from Avalanche, and to add about 45 minutes from Sprague. I hoped this was conservative and I'd be at least a bit quicker. I knew the descent would be much shorter. I hoped a 6 A.M.wake up would have me back near 11, and I ended up real close.
As I said, Chris was hoping to do the ride as well. But he and his family were pulling in Saturday and we were all leaving Monday, which really only left Sunday, and the girls had hike plans.... Plus the weather forecast was deteriorating later in the week (it ended up raining steady from early Friday morning through early Saturday morning - the most rain they had all summer so far.) On Tuesday I ran into Trey, one of my teammates from BRM! I was super-surprised since I had no idea he was there. He was staying at the lodge for the week with his wife and daughter before heading to Canada. He said he was planing on riding Going-To-The-Sun the next morning. I thought about inviting myself along, but we had family hike plans up at Logan Pass. It ended up being a beautiful day, and he had a great ride. That fueled my desire to get up there before the weather turned; it looked like needed to be Thursday or bust.
After breakfast and ride prepping I was on the road at 7, shortly passed by one cyclist on a road bike, and just past Avalanche watched him catch the tail end of a short line of cars following the pilot car through the construction zone while I was flagged for a 10 minute wait. This construction ended up being a good thing. I was worried about traffic on the ascent, but it was surprisingly light in the morning so I had the road nearly to myself for the whole way up. But also, because of the flagger, the cars would come in small waves about every 15-20 minutes, between five and a dozen vehicles, and then silence until the next wave with virtually no one coming down at that time of day. The forecast was sketchy with possible morning showers and high chance of thunderstorms later. In camp I stepped out to look over the lake and it looked pretty good to the west. But when I mounted up and got on the road heading east, clouds were already building over the mountains and I was afraid I wouldn't finish or get back to camp dry. But as it turned out, it was cool, a little breezy at the top, with a headwind the last couple miles as I approached Logan Pass, but the weather stayed dry.
Past Avalanche Campground the road follows McDonald Creek for about 6 miles of gradual uphill before it leaves the creek and begins the steady 12 mile climb. About 3 miles and maybe 1K up is "The Loop," the only switchback on the west side. There's a bathroom and a main trailhead for the Highline Trail and Granite Park Chalet. From here, it's 9 miles of steady climbing. The valley drops off to your immediate right, and the views just keep opening and you enter alpine meadows and slowly pull level with glaciers that earlier loomed above. 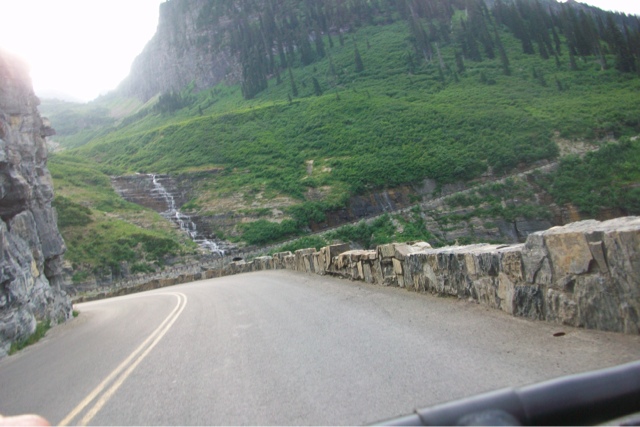 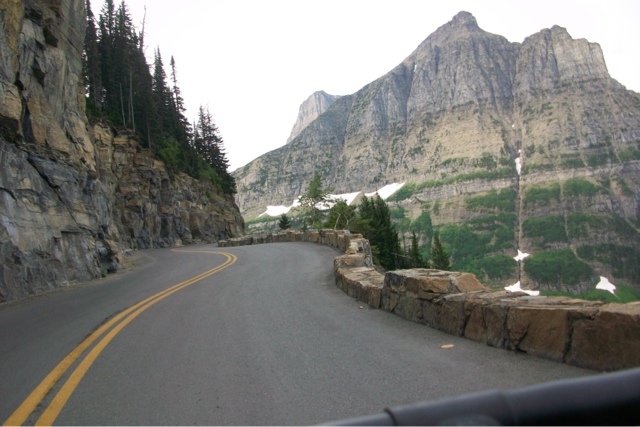 The climb is relentless, but never steep. The road is a marvel, really. About half way up this stretch is a curve called Big Bend where you can see all the way up to Logan Pass, and the rest of the road ahead. it's breathtaking and a bit daunting. The last 1-1/2 mile, from around Triple Arches up, I started relly feeling it, and the headwind picked up. But it's also when I knew the weather and clock would not turn me back. On the last curve approaching Logan Pass there were a couple mountain goats right there to greet me as I topped out. I snapped a quick picture at sign, then headed to the visitor center for a little sit down and a summit muffin. 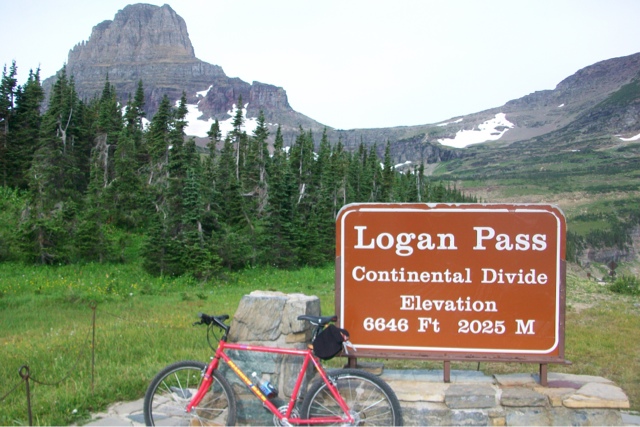 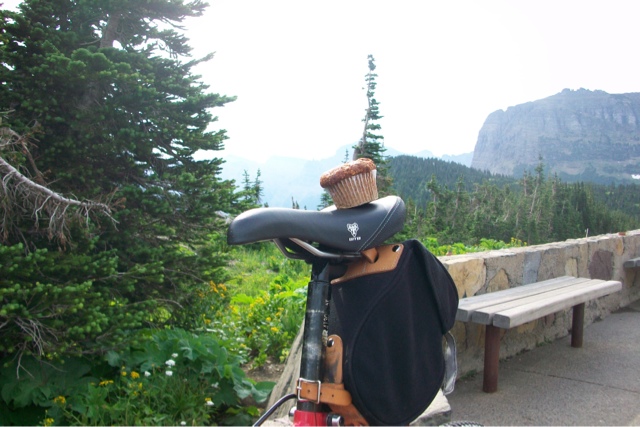 I greeted three other cyclist on top; two who had just come up the east side, and the guy who passed me way down by Avalanche. He didn't seem to have been there for very long, which felt good. I arrived on top about 9:45, and was heading down and opening it on the descent by 10.
Traffic was still pretty light coming up, and NO ONE passed me going down until I hit the valley floor. I hardly touched the brakes, and had one of the funnest smooth and winding descents I can remember. In minutes I was back at the construction zone for another wait, and then rode the final miles back to
camp. 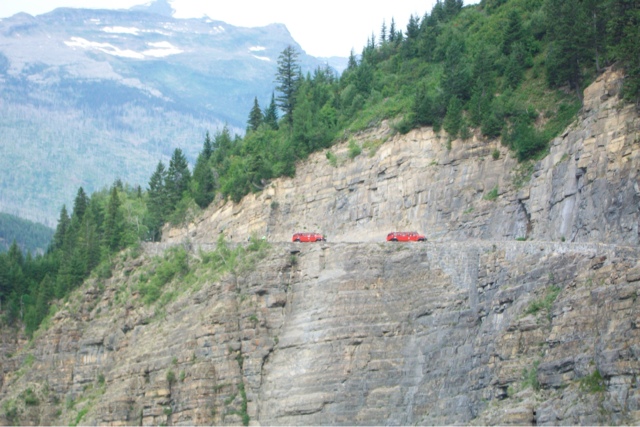 McDonald Lodge was one mile before camp, and I happened to glance into the parking lot as I rode by and saw my car! I pulled in and there was my wife and daughters walking across the parking lot from the general store. We walked to the lodge together and I enjoyed a coffee on the porch looking over the lake. It was 11:20.
Note: On leaving Lake McDonald, I got on my bike and stood on the crank and "ping" - broke a drive side spoke. The wheel went wobbly, of course, and I had to open the rear brake to get back the last mile. I almost never brake spokes, but not too surprising on a $5 bike, I guess. Good timing, that.
This bike doesn't have a rack, and only one water bottle cage. I felt like I needed more than I could carry in a seat bag (jacket, food, water bladder, etc) so I wore a Vaude pack, which I hardly noticed. I wore a light Patagonia LS wool shirt and Gi shorts, with Keen sandals on platform pedals - no "bike" clothes at all. 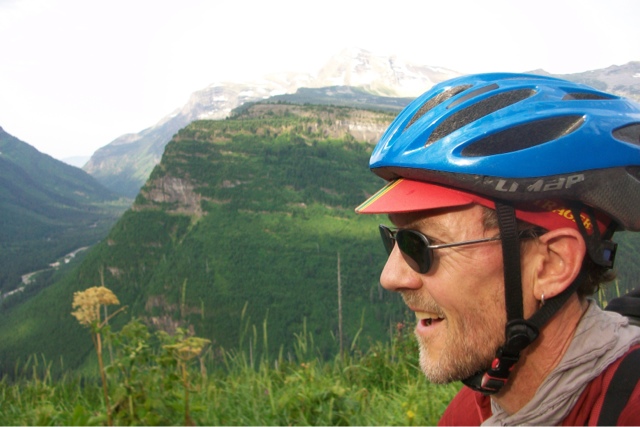 The ride put a grin on my face that lasted for days, I think. And even before it was done I started thinking about doing it again. After all, I only rode half of Going-To-The-Sun road. Next time I'd like to go up and over. Maybe have lunch on the east side, hang out, and return after 4 P.M. I've also read that it's a fantastic ride by full moon. That would be spectacular!
Posted by Velomann at 10:24 AM

Velomann
Some day I'm going to have "READ" tatooed on the knuckles of my left hand, and "RIDE" tattooed on my right.