skip to main | skip to sidebar

in which seemingly dumb decisions turn out just fine... 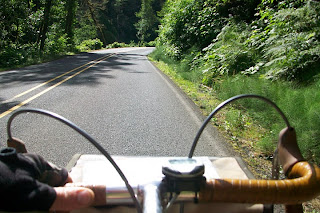 Clothes: I wore my Keen commuter sandals with light wool socks for riding and they were great. Off the bike I wore flip-flops. I decided for this ride not to dress like a cyclist. It was an NLR (No Lycra Ride). mostly this was an experiment in comfort, but I also had a theory that drivers would see me differently if I dressed like a tourist on a bike as opposed to a cyclist. most of the time I wore lightweight nylon Patagonia Gi II shorts and a puckerwear SS shirt. In the cool of the morning I wore a lightweight Patagonia R1 longsleeve wool zip shirt with my Marmot DriClime windshirt and some nylon running pants. I was as comfortable on my bike as I've ever been - this worked for me. I also had along my old Burley rainjacket; it stayed in the bottom of the pannier.

And I took Bagbalm and used it liberally. It worked - 'nuff said.

As an experimental ride, this was a roaring success. Getting this under my belt has given me a tremendous confidence boost to continue ranging out on overnighters. I scared myself away from returning over the higher and more remote pass up the Nestucca River, opting instead for the longer but more moderate Little Nestucca route. But already, a week later, I'm planning on how and when I can go back and ride that road.

I want to thank Kent (Mountain Turtle) Peterson, Michael (Leafslayer) Johnson, and Russ Roca & Laura Crawford (The Path Less Pedaled) who all, unknowingly, provided inspiration and encouragement with their practical and down to earth trip reports and touring advice, most of which can be summed up by saying, "Don't worry about the bike, don't worry about the gear, just get out there and ride." I did. I will. 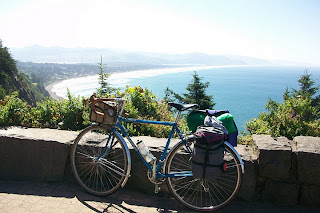 Velomann
Some day I'm going to have "READ" tatooed on the knuckles of my left hand, and "RIDE" tattooed on my right.